GWCCA recycling and waste diversion: One event’s trash is another organization’s treasure

But what happens to the trash after these mega-events end? Many people don’t think about this. To put on a sizeable trade show or convention, a complex level of logistics must happen, and the last thing people want to think about is trash. Trash sounds gross and icky, but oftentimes it’s not actually trash. Many materials can be recycled or repurposed.

Three recent large-scale events illustrate the diversity of materials that can be recycled and diverted from landfills as the Authority works with various partners to reduce the campus’ carbon footprint.

In early September, the Georgia World Congress Center (GWCC) hosted the Ace Hardware Fall Convention and Exhibits which showcased products that Ace Hardware sells in its stores. Once the show ended, there was quite a bit of material leftover. With the help of our event partners, the Authority was able to donate 200 shelving units or about four tons of material.

When events move out of the building, they generally have a few days to get everything out. The Authority works with several different companies to ensure everything goes according to plan. We partner with local organizations, such as the Salvation Army, the Atlanta Mission, Goodr, the Atlanta Community Food Bank, and Habitat for Humanity to facilitate donations. In the Ace Hardware scenario, the Salvation Army was able to repurpose this material, diverting it from the landfill.

The Congress Center hosted GlassBuild America 2019 in September as well. This event showcased a lot of glass and glass cutting machines. During the show, a significant amount of glass was cut and/or shattered. Instead of throwing the glass away with the regular trash (which is extremely dangerous), it was recycled safely. With assistance from GWCCA’s waste hauler Waste Management, the type of glass that was being disposed of was identified, the recycling facility in which the glass would be hauled to was determined, and specialized open-top dumpsters for the glass to be put in were ordered and delivered. At the end of the show, 20.47 tons of glass was recycled.

Earlier this month, the GWCC hosted the National Association of Convenience Stores 2019 (NACS). The massive event took place in all three buildings of the 3.9 million-square-foot convention center with an estimated 24,000 attendees. Imagine walking into a convenience store and having the ability to get anything you’ve ever wanted. There an array of food  showcased, such as candy, pizza, chicken tenders, etc. It was amazing and it smelled so good.

But at the end of the event, there was a lot of leftover food and no one wanted it to go to waste. By the final day of the show’s move out, more than 80,000 pounds of food was donated to the Atlanta Community Food Bank, almost half of that being protein[ . A more detailed article on the food donations can be found here: https://fuelsmarketnews.com/tyson-foods-nacs-donate-truckload-of-protein-to-atlanta-community-food-bank/.

The GWCCA is committed to a sustainable future. The GWCC is the largest LEED (Leadership in Energy and Environmental Design) Gold convention center in the world.

As the resident waste diversion specialist, I work hard to reduce as much waste from the landfill as possible. It’s only possible to do this by working very closely with other entities such as event managers, contractors, exhibitors, and vendors. And with the right planning, training, and teamwork, anything can be accomplished. 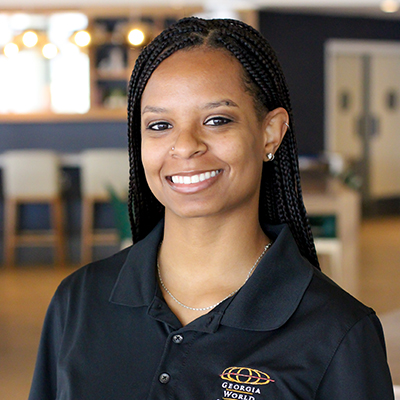 Posted by
Melanie Vaughn / Operations Specialist
on Oct. 10, 2019
Melanie was born and raised in Los Angeles, but recently moved to Atlanta to pursue a career in waste diversion and recycling. She is GWCCA’s waste expert. Her customer service mantra is: “Is that recyclable?"

One response to “GWCCA recycling and waste diversion: One event’s trash is another organization’s treasure”