College football fans will get a nice break from the dog days of summer when SEC Media Days kick off at the Chick-fil-A College Football Hall of Fame and Omni Atlanta Hotel at CNN Center next week.

The event gets a jumpstart on Sunday (July 15) with the inaugural SEC Football Kickoff Summerfest presented by Regions Bank at Centennial Olympic Park.

This first-of-its-kind free fan event gives attendees the opportunity to engage with fellow SEC supporters in a family-friendly game day environment featuring the first SEC Nation broadcast of the 2018 football season on the SEC Network. Other activities include live music, food trucks, interactives and more.

SEC Summerfest is scheduled from 1 p.m. to 8 p.m. in the next west lawn promenade portion of the park located on Marietta St. between Andrew Young International Blvd. and Park Avenue. The popular SEC Nation show will broadcast live from 6-8 p.m.

The College Football Hall of Fame, across the street from Centennial Olympic Park, will be open during SEC Summerfest until 5 p.m. Tickets for admission to the Hall of Fame can be purchased online at www.cfbhall.com or at the door. 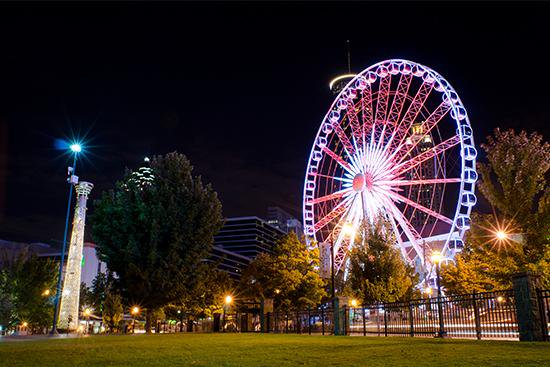 Also on Sunday, Centennial Olympic Park’s neighbor SkyView Ferris Wheel, which towers 20 stories above the park offering panoramic views of downtown Atlanta, is celebrating its fifth anniversary with family-friendly activities.  Doors open at 10 a.m. and the bash lasts until 6 p.m. The first 50 patrons get in free.

For tickets and more information, go to www.skyviewatlanta.com.

Meanwhile, SEC Football Kickoff Media Days will be held Monday (July 16) through Thursday (July 19) at the College Football Hall of Fame and Omni Atlanta Hotel at CNN Center. Coaches and players from all 14 SEC institutions will meet with more than 1,000 members of the media in the annual ceremonial kickoff to the football season.

It is the first time SEC Media Days has been held in Atlanta, another feather in the cap for our city that’s solidifying its position as the epicenter of college football.

Posted by
Parker Hendricks   Marketing Specialist
on Jul. 13, 2018
With a background in collegiate sports marketing, Parker Hendricks joined the Authority in 2016. He is the GWCCA’s social media guru. Winston Churchill described customer service the best, "We make a living by what we get. We make a life by what we give."