Tuesday Talk rounds up the latest Georgia World Congress Center Authority (GWCCA) news you might have missed and also points forward to upcoming events on our campus.

CORPORATE SOCIAL RESPONSIBILITY TAKES CENTER STAGE
The latest edition of the Authority’s video series Center of Attention is out now and the topic is fitting for Earth Month: Corporate Social Responsibility (CSR).
The GWCCA’s CSR Manager Tim Trefzer and CSR Coordinator Jennifer Tinker take viewers on a video tour of the organization’s various CSR initiatives, including everything from our on-campus beehives to waste diversion efforts, energy and water efficiency projects, on-site electric vehicle charging stations, solar panels, and corporate volunteer programs with the Atlanta Community Food Bank, Everybody Wins! Atlanta reading program, the American Red Cross, and the Atlanta Mission.
Check out the video below.


AND MORE CSR
Speaking of CSR and sustainability, the Atlanta Journal-Constitution recently profiled food waste management company Goodr, which takes leftover food that is still edible from businesses, including the GWCCA, and delivers it to those in need.
GWCCA’s CSR manager Trefzer is quoted in the story:
“That food goes to a handful of ministries we work with,” Trefzer said. “But, Goodr allows us to expand the food we are saving. We’re able to capture, package and transport prepared hot food, something we did not do before. For example, during the Super Bowl, we hosted an event for the National Football League team owners. The ‘do-goodrs’ took the (extra) food from our trays, packaged it into their containers, and took it to those who could use it.”
Click here for the full story (subscription required).
GOT A MINUTE TO GIVE?
Sticking with the CSR theme, after a successful inaugural year that raised $30,000 for 20 different charities, the SweetWater 420 Fest Band Charity Auction is back for another installment as the three-day festival is set to take over Centennial Olympic Park this weekend (April 19-21). 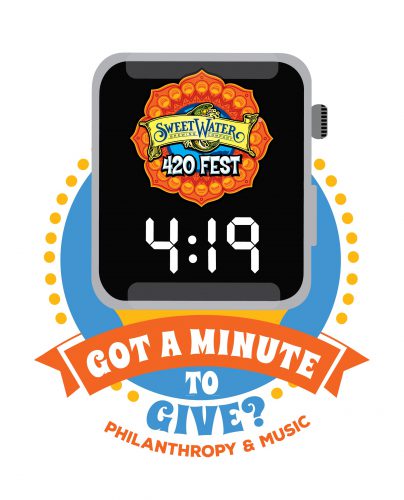 Here’s how it works:
Artists performing at the festival have selected the charities they want to benefit and offered up signed memorabilia, concert tickets, meet-and-greet sessions, and other items to be bid on.
For instance, festival performers Joe Russo’s Almost Dead (JRAD) and the Claypool Lennon Delirium both chose the Atlanta Community Food Bank to benefit, and fans can help them raise money by bidding on such items as an autographed JRAD drum head, various JRAD concert posters, and an autographed vinyl copy of the Claypool Lennon Delirium’s “South of Reality” album.
Other auction items include a D’Angelico electric guitar signed by various 420 Fest artists, a photo shoot and meet-and-greet session with festival act Moon Taxi, a four-ticket package to any show by headliners the Avett Brothers on their upcoming tour, and you can even have 420 performers Pigeons Playing Ping Pong record an outgoing message on your voicemail.
Check out all of the auction items here.
Mobile bidding began Monday and lasts through the festival weekend.
To register for online bidding, go to: https://one.bidpal.net/420fest/welcome.
For mobile bidding registration, text 420Fest to 243725.

THIS WEEK ON CAMPUS
It’s another busy week on the GWCCA’s 220-plus downtown Atlanta campus, with a smorgasbord of events on the docket, from pro soccer to one of Atlanta’s signature music festivals to an Easter Sunday service.

Posted by
Kent Kimes   Sr. Staff Writer
on Apr. 16, 2019
A metro Atlanta native, Kent joined the Authority in 2015. He is your digital tour guide to the No. 1 convention, sports and entertainment destination in the world. His customer service approach is summed up by the Little River Band track "Help Is On Its Way."